I have exciting news! My office started carrying a leading  ANTI AGING skin care line, Rodan & Fields. Dr. Rodan & Dr. Fields are two dermatologists, who created acne fighting product Proactive in late 90s. In early 2000s they have extended their expertise into the anti aging skin care line for men and women interested in looking their best every day. The new line has a sun protection and age defying regimen REVERSE, as well as a skin maintenance and rejuvenation kits REDEFINE.  There is an improved acne fighting line UNBLEMISH as well for younger patients, and people suffering from adult acne.  The most revolutionary product to me as an ophthalmologist is LASH BOOST which GROWS your lashes over 2 months of use. NO MORE EXTENSIONS!
I am so excited to be part of R & F team, and to be able to extend the years of research from the leading dermatologists to benefit my patients.
Summer is the perfect time to protect your face from sun damaging rays as well as rejuvenate and repair skin, boost eyelashes and eliminate fine lines.
Starting June 22, 2017 purchase skin care kit+LASH BOOST to receive 20% off.
*First three patients in the month of June to come to our office for an eye exam and mention this ad, will get a FREE sample of GLOW packet for skin rejuvenation and 10% towards LASH BOOST purchase!*

See more at: drkurteeva.randf.com and shop the skin care line of your choice.
Posted by Dr. Katerina Kurteeva at 4:39 PM No comments:

Have you noticed your "sunkissed" eyes looking yellow lately?


Southern California boasts 281 sunny days a year. Sunny days means tremendous amount of direct ultraviolet radiation exposure to our skin and eye surface. Without the physical protection of sunglasses and a wide brim hat, continuous UV radiation results in chronic and permanent changes on the white part of the eye called conjunctiva.

Conjunctiva when healthy is smooth, moist, and white; it has a glistening reflection from an abundant tear film covering it. Sun leads to mutations in the way elastin and collagen, the soft tissue building blocks, are synthesized on the eye surface and dermis of the skin. These mutations lead to permanent deposition of yellow, fatty, elevated tissue on the white of the conjunctiva. These striking deposits grow over time to unsightly and commonly irritating lesions called pingueculi. These areas are frequently easily irritated by wind or allergies and turn the whole eye red.  When the fatty deposits cross over the cornea, the clear window of the eye, the clarity of vision is affected by the pulling of the scar affecting the optics of the eye.

Most people are not aware that removal of the pterygium is a short outpatient procedure with minimal down time. It is done at an outpatient facility and most patients return to desk jobs within two days. With the use of doctor prescribed eye drops the healing process continues for a month after surgery until the eye looks “pristine” and white as it did before sun damage ravaged the ocular surface.

Surfers and farm workers are people that are most affected by pterygia. People who spend significant hours outdoors golfing, sailing, fishing or playing tennis maybe at risk as well if sunglasses are not worn. Some people have a genetic predisposition to develop sun damage

as early as teens. For those patients the cosmetic effect of the pterygium or even pingueculum is quite significant.


Our office speciliazes in identifying and treating sun damage of the ocular surface with medical options as well as a more definitive surgical removal.


Posted by Dr. Katerina Kurteeva at 12:37 AM No comments:

Posted by Dr. Katerina Kurteeva at 8:04 PM No comments:

(CNN)From 2012 to 2015, the number of chemical burns to the eye linked to laundry detergent packets rose more than 30 times among young children, a new study says. More than 1,200 3- and 4-year-olds received such burns in that time period, according to the research published Thursday in the medical journal JAMA Ophthalmology.
Single-dose detergent packs, known as laundry packets or pods, entered the mass market in 2012.
"Each pod consists of a detergent mixture wrapped in a water-soluble film, made up of a proprietary polyvinyl alcohol polymer," said Eric J. Moorhead, president and principal scientist of Good Chemistry LLC, a consulting firm.
Laundry detergent pods are 'real risk' to poison kids
"The liquid detergent in the pods is not the same as regular liquid detergent. It has a higher concentration of surfactants, chemicals that are responsible for stain removal," said Moorhead, who was not involved in the new study. "At high concentrations, these ordinarily safe ingredients can cause irritation, especially in sensitive areas like the eyes."

'Among the worst chemicals'

Among kids between 3 and 4 years old, the number of chemical burns in the eye caused by laundry detergent packets increased from 12 instances in 2012 to 480 in 2015. Proportionally, the total chemical eye injuries associated with the packets increased from 0.8% of all burns in 2012 to 26% in 2015.
Children can injure themselves when the packets break and the contents squirt into one or both eyes, or when the contents leak onto the children's hands and they rub their eyes.
Most of these burns happened in the home, where kids are playing with the brightly colored packets, "wondering if they're toys, if they're candy," said the lead researcher, Dr. R. Sterling Haring of Johns Hopkins University. They're neither. 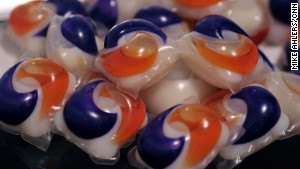 Laundry packet poisonings increase in kids
The detergents inside the pods "are among the worst chemicals that the eye can be exposed to," Haring said: Detergents are alkaline in nature, and alkaline burns are typically more severe than acid burns in the eye. "They penetrate deeper, they burn faster, and they are more caustic to the tissues in the eye itself."
Because the cornea doesn't have blood vessels, it doesn't heal well, so if you scar it with detergent packet chemicals, "there's a high risk of long-term vision impairment," Haring said.
"We'd done another study a few months ago that showed that small children are at highest risk for all types of chemical ocular burns, and that kind of flew in the face of conventional wisdom," he said. "They always thought that working-age men were the highest risk group: working in factories, splashing chemical in their eyes."
Instead, he and his colleagues were surprised to find that young children have a 50% higher risk than the highest-risk adult, Haring said. Once that news got out, community physicians insisted that the cause was laundry detergent packets. Haring and his team discovered that they were right. Their study concludes with recommendations that parents properly store these packets and that manufacturers consider new, redesigned packaging.
In essence, these recommendations "are already in play," said Brian Sansoni, vice president of sustainability initiatives at the American Cleaning Institute, which represents the US cleaning products industry.
He said the new study analyzed data prior to the new safety standards that were published in December 2015 by ASTM International, formerly American Society for Testing and Materials International, a non-profit that develops voluntary consensus standards for consumer manufacturers. The American Cleaning Institute helped identify proper standards for the packets.
Following publication of the safety standards, Procter & Gamble, the company that makes Gain and Tide brand laundry detergent pods, launched ad campaigns to raise awareness of the dangers and made its packaging more difficult for small children to open. Other companies also followed suit.
"Make sure you keep these products up and away from children -- like a lot of household products," said Sansoni.

What should parents do?

Dr. Michael Grosso, chairman of the department of pediatrics and chief medical officer at Northwell Health's Huntington Hospital in Huntington, New York, said parents need to worry about these laundry packets and keep them out of the way.
Join the conversation
See the latest news and share your comments with CNN Health on Facebook and Twitter.
"It's not only eye injuries. Children will also swallow these," said Grosso, who was not involved in the study. Eye injuries caused by the packets "can be quite serious," he added.
"The majority of individuals will recover their vision after this kind of injury," he said. However, these burns can be "very, very painful. They require extensive emergency treatment and extensive follow-up treatment by an ophthalmologist."
The first thing parents should do is "prevent this by keeping these pods out of the way. They need to be kept up high in cabinets beyond the reach of a preschool child, the group that's most at risk."
If a child does get detergent in their eye, a parent should immediately irrigate the child's eyes.
"Cool tap water, as much as possible, as soon as possible," Grosso said. "And then the very next step would be a trip to the emergency department."
Haring echoed this advice. "Take your child and put their eye under cool water under the faucet and flush it with cool water for 20 minutes," he said, noting that if the burn is extremely severe, some loss of vision could occur.
"Don't stop and take them to the hospital. Don't call and wait for an ambulance to show up. Flush the eye with cool water before you do anything else," Haring said. "That's going to be the deciding factor about long-term outcome for this injury."
Posted by Dr. Katerina Kurteeva at 11:19 AM No comments: